Crazy Creations celebrated Crazy Mohan’s 69th Birthday with a special function  jointly with Sri Thyaga Brahma Gana Sabha on Saturday,16th Oct, at Vani Mahal .Reputed Nephrologist Dr. Rajan Ravichandran was awarded the Crazy Mohan Award of Excellence in recognition of his contribution in the field of medicine and rendering service to society and helping the under privileged through his Sapiens Health Foundation. The award carried a citation  hailing his achievements and a memento. Shri Ravi Appaswami, MD, Appaswami Real Estate presented the award to Dr Rajan Ravichandran and described him as a worthy choice for the award. Carnatic vocalist Gayathri Girish, Veteran stage actor Kathadi Ramamurthy felicitated the awardee .
Dr. Rajan Ravichandran in his acceptance speech regaled the audience with humorous incidents in his journey and highlighted the importance of early detection of kidney ailments and the work being done by the Foundation. Recalling his long friendship with Crazy Mohan he shared that as ambassador for Sapiens Health Foundation’s campaigns Mohan helped in many ways to support the activities of Sapiens. Dr Rajan Ravichandran touched upon the most relevant health issue plaguing the population due to salt intake which is higher than prescribed norms . He expressed his gratitude to the Crazy team for bestowing the award. Crazy Balaji in his speech  peppered with evoking laughter from the audience shared a few instances of how Dr.Rajan Ravichandran helped patients and the quality of his diagnosis and treatment that saved many precious lives . Director SB Khanthan compered the event .This was followed by Crazy Premier League a hilarious  play by Crazy Creations troupe. 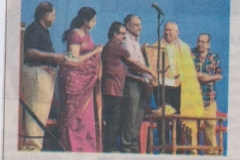 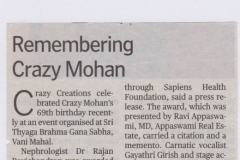 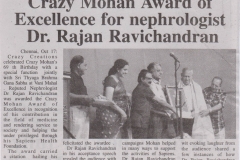 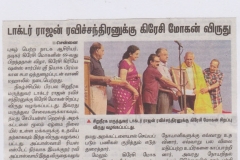